Kokanee Salmon: Everything You Need To Know – Clevefit Skip to content

Kokanee Salmon: Everything You Need To Know

Facts About Piebald Deer | What Every Hunter Should Know November 8, 2021

Kokanee Salmon: Everything You Need To Know The kokanee salmon is regarded as one of the most famous freshwater fish in the world of fishing. It's impossible to miss with its hooked jaw and stunning scales. They don't grow as large as their salmon cousins, but they're still enjoyable to capture and much more enjoyable to cook and eat.

Kokanee fishing differs slightly from other types of fishing. Because these fish eat mostly tiny zooplankton, catching them with a bait that matches their preferred meal is futile. An angler must employ a noisy, bright lure, either with or without an attractant, to disturb the kokanee enough for them to strike.

Here are some more intriguing facts about the kokanee salmon, which is a blast to troll for and delicious to eat.

This landlocked salmon is a close cousin of the sockeye. Except for one significant variation, they are nearly indistinguishable. Many other salmon species make the mythical journey to the ocean before returning to breed in a river or lake. Kokanee salmon do not. The kokanee, on the other hand, live their entire lives on land, in a freshwater environment.

They are native to Oregon, Washington, Idaho, Alaska, and British Columbia in the United States, and have a small range. They've also been introduced into a few other states, including kokanee populations in Utah, Montana, and New York, as well as other game fish.

Kokanee are little fish that reach a maximum size of six pounds. They are known as silver salmon or silver trout in some areas because they are silver throughout the most of their lives. They grow and are ready to spawn when they reach the age of 3-5 years. The males acquire a hump, and the silver fish turns brilliant red with a green and black head.

Because of their striking red hue, spawning kokanee salmon are especially vulnerable to eagles, bears, and anglers. They spawn in both deep seas and shallow streams, and spawning is one of the last things the kokanee will perform. Salmon die after they have spawned. 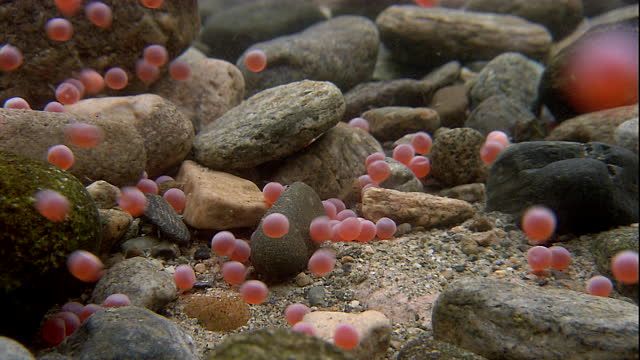 A female Kokanee contains between 250 and 2000 eggs which she will deposit in two to three nests, called redds, at spawning time in the late autumn. Over the winter months, the eggs develop and in February they hatch into tiny fish called alevin. The alevin remain in the gravel for one to two months. 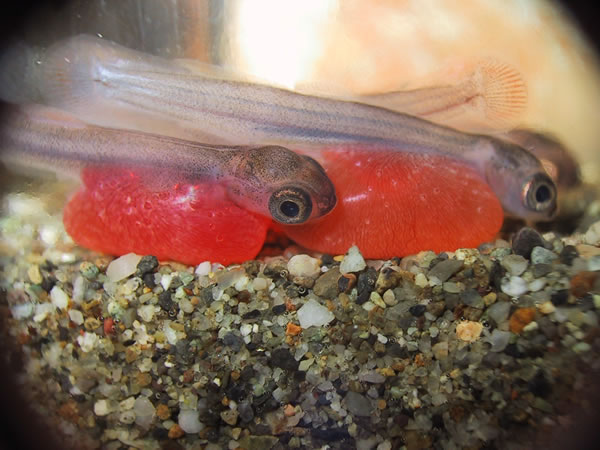 During their time in the gravel the alevin do not feed. They receive nutrition from their large yolk sac until the time when they emerge from the gravel as fry, sometime between March and early April. 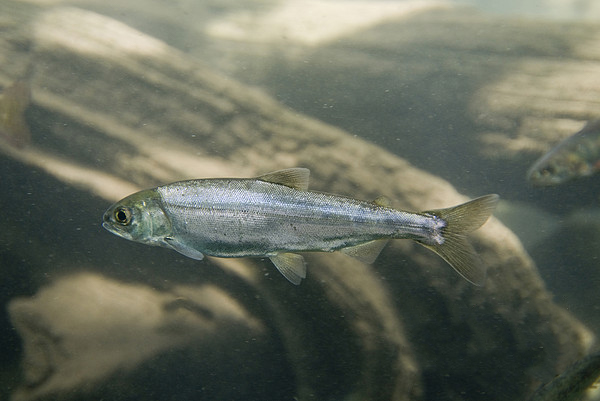 The fry typically emerge from the gravel at night and are immediately swept downstream with the spring runoff water. Once in the lake, they feed on plankton and small attached organisms along the lakeshore. By the following spring, they have grown to a size which classifies them as yearlings. It will, however, take them three years to reach adulthood. 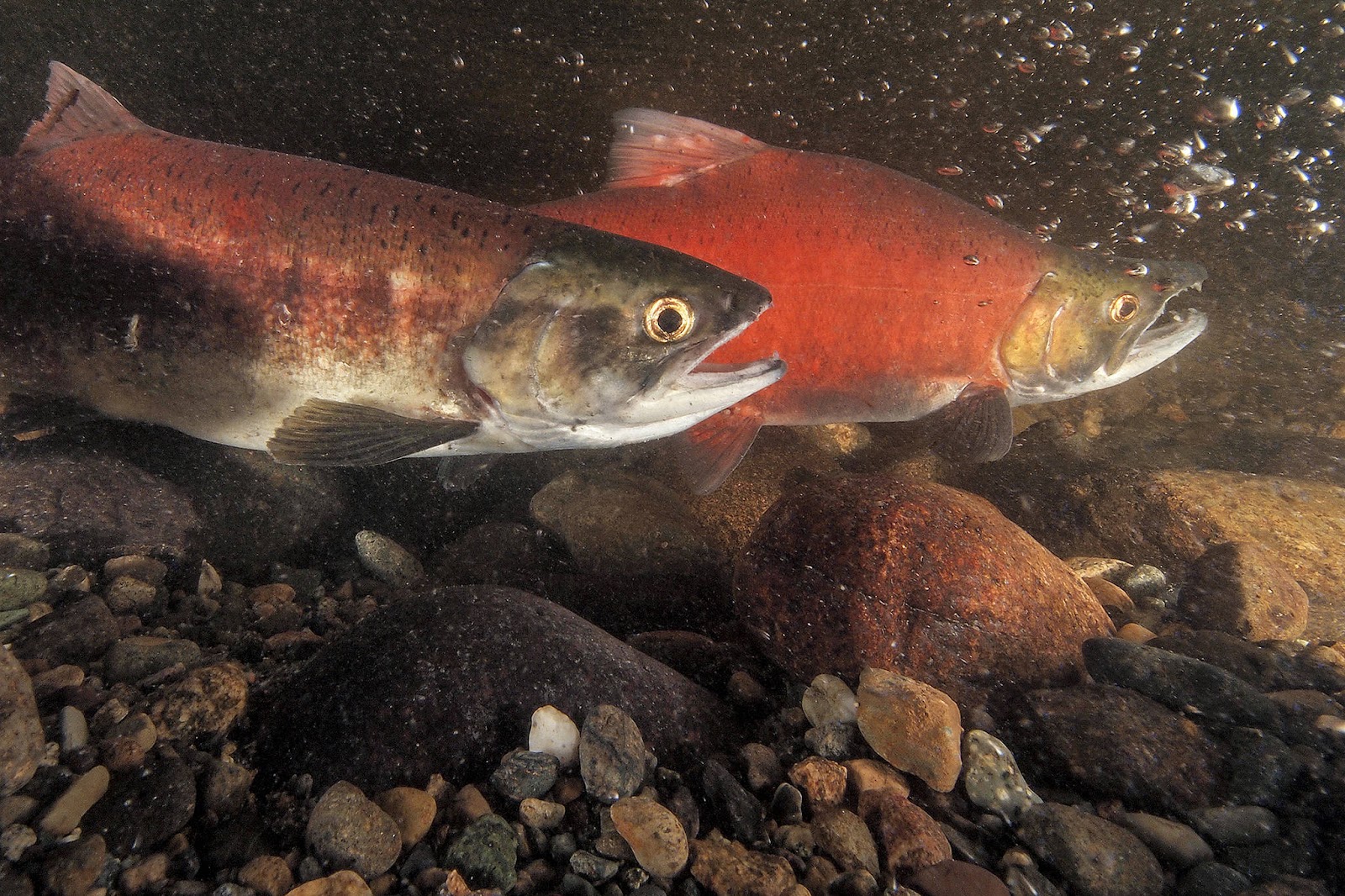 By three years of age, Kokanee contribute to the sports fishery. The catch record for a "silver", the local name often used for them at this age, is 9.8 pounds. Typically, by year three, they become mature and may begin a spawning migration. Some, however, migrate at four or five years in age.

The age of a Kokanee is sometimes determined by examining its otolith (inner ear bone), but more often, it's easier to tell the age of a salmon by looking at its scales. As the scales of a salmon grow they form rings, just like a growing tree. These rings form bands which can be counted. The bands even correspond to how much food the Kokanee is getting. They are widely spaced in the spring and summer months when food supply is abundant. The more tightly packed rings indicate the winter months when growth is slow, because of a more limited food supply. 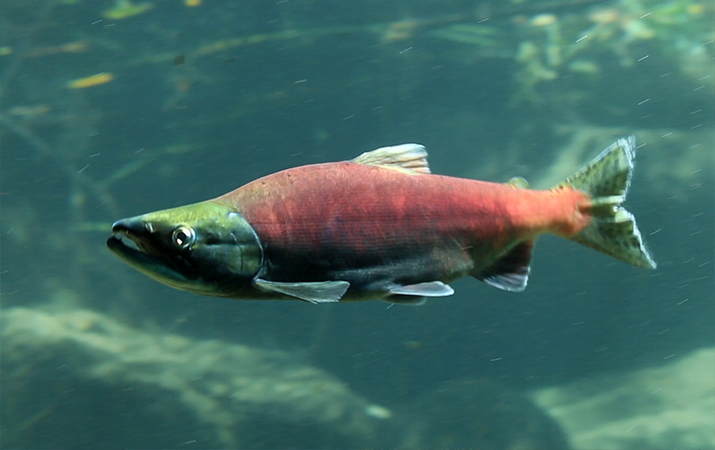 Most Kokanee reach maturity between  March and April of year 4:

Upon maturity, Kokanee become red over most of the body. The male develops a long, hooked jaw and a slightly humped back. They migrate into streams in August of their maturing year. By this time, both male and female stop eating. By spawning time much of the body mass has been converted to energy for migration and spawning, or to sperm or eggs. Even the fish's scales are absorbed.

Kokanee, like other salmonids, are capable of returning to the stream of their birth using their acute sense of smell. Having arrived at a suitable site, the female begins to dig a nest called a redd. She turns on her side and violently flips her tail to move gravel downstream. The redd may be six to twelve inches deep. 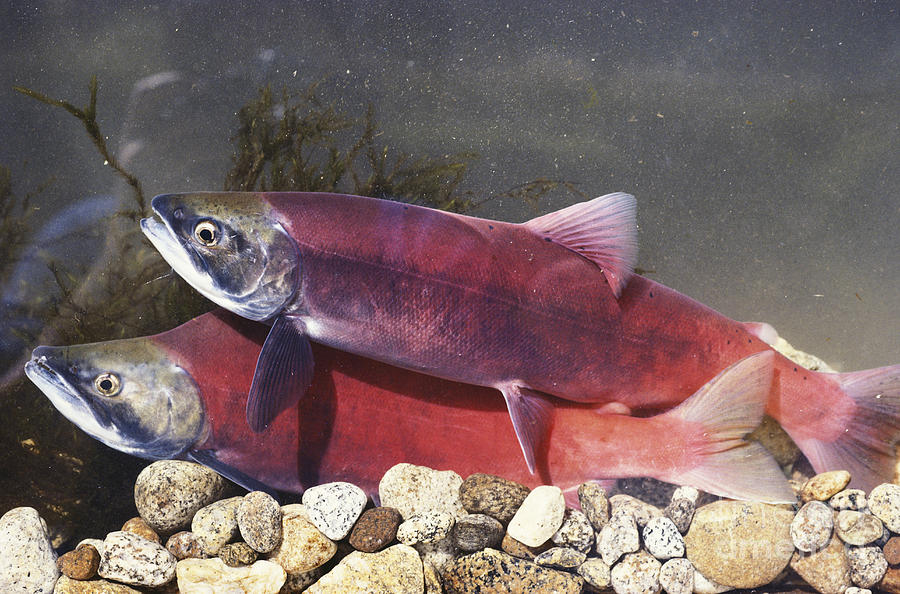 While the female is digging the redd, the males court the female. When the female is ready to spawn, she permits a male to join her in the redd. After a courtship that involves a series of subtle moves, both fish quiver and shake as the eggs and sperm are simultaneously released. The eggs and sperm mix in the water as they drop between the gravel crevices in the redd. The female then gently covers the eggs by moving gravel into the redd before moving to another nesting site. The female will dig two to three redds before all her eggs are spent. She will not necessarily spawn with the same male at each redd. Both adults will die within days of spawning.

How do I catch kokanee? These game fish have become one of the most popular species of fish to capture since they are both enjoyable to catch and delicious to eat. There are, however, a few factors to keep in mind in order to catch this landlocked species.

Zooplankton—tiny organisms as small as a pinhead—vegetation, insects, and freshwater shrimp are the primary food sources for these fish. Gill rakers, which are unique combs on their gills, are used to extract zooplankton from the water.

Because kokanee's typical food is so little, the fundamental idea behind fishing for them is to upset them sufficiently that they strike your bait in anger rather than as a predator. This is why most kokanee lures are vivid colors like hot pink, magenta, and bright yellow.

Dodgers, spinners, spoons, and even plain red hooks are all effective lures when used in this manner. To attract the attention of the fish, some fishermen tip their spinners and spoons with pieces of corn or use an attractant. This salmon has plenty of strong teeth with which to cut a line, therefore a lead is essential.

Some even use special corn colours to make the kokanee bait even more appealing and flashy. Individual poles and reels, generally with light to medium action, are made specifically for kokanee fishers.

Trolling is the most popular way for catching this fish, along with bright colors and plenty of attractants. Using a fish finder, locate a school of fish and troll straight through it.

Fly-fishing is another more difficult approach to catch these salmon. The best time to catch this species is when the kokanee are spawning in streams, because the fish aren't eating and are therefore more aggressive.

These are the perfect fish to toss on the barbecue a few hours after catching them in the river. Just make sure you preserve one properly after catching it so it doesn't spoil before you can use it in a meal.

How do I cook Kokanee Kokanee are substantially smaller than their saltwater cousins, reaching about 12 to 15 inches in length. Because of its smaller size, you should clean and cook this fish the same way you would a trout from a stream or river.

The greatest time to consume kokanee is right before it spawns. Their flesh is a striking bright orange that many anglers crave, with a richer flavor than trout but a softer texture than other salmon. You can fillet the fish if it is longer than 12 inches. It can also be butterflied or gutted and grilled. The latter method is perfect for camping dinners, and if you're not finicky, you can leave the skin and head on.

Even if you butterfly or fillet your Kokanee, cook it with the skin on. The meat of this salmon is delicate and tends to come apart when cooked. Butterflying is advantageous because it provides a bigger surface area for seasonings and marinades.

Some fisherman choose to cook their kokanee by grilling it whole or smoking it, similar to how they cook sardines in the Mediterranean Sea.

How To Winterize A Boat: A Complete Guide

How To Catch Crawfish Effectively?

What Is Drift Sock? How To Use It For Catching Catfish?

How To Choose Suitable Types Of Fishing Line?